Seleno-Iodide is designed to provide key nutrients for optimal thyroid and breast health.

Iodine is an essential trace mineral found in various forms in nature and is necessary for human growth and development. Dietary sources of iodine include seafood, seaweeds including wakame and nori, navy beans, potatoes, and iodized salt. Approximately 15 to 20 mg of iodine is concentrated in the thyroid gland in a healthy human body. Iodine is necessary for the synthesis of thyroid hormones, as it is one of the most important components of the hormones thyroxine (T4) and tri-iodothyronine (T3). T3 is the most active thyroid hormone and binds to receptors in the liver and brain to regulate gene expression. In addition to supporting thyroid hormone production, research shows iodine acts as an antioxidant, supporting a healthy thyroid gland and protecting a variety of tissues, including mammary tissue, the eyes and gastrointestinal lining. In other tissues, such as the mammary glands, the protective role of iodine is connected to its antioxidant function. Iodide can act as an electron donor in the presence of hydrogen peroxide and peroxidase, thereby decreasing damage by free oxygen radicals (Figure 1). In research studies, serum concentrations of iodine as low as 15 micromolar have demonstrated comparable antioxidant activity to vitamin C.

Selenium is a trace mineral required to produce several important compounds, including enzymes involved in antioxidant mechanisms and thyroid hormone metabolism. Selenium intake depends largely on soil conditions in the region where food is grown or raised. Food sources of selenium include Brazil nuts, eggs, peas, poultry and meats. SelenoExcell® is a bioavailable, organic selenium supplement that is closest to forms found in nature. Under-functioning of the thyroid has been found to be common in regions where selenium deficiency rates are high. Selenium is crucial in supporting thyroid health, as it is a required cofactor for three key enzymes involved in the production of thyroid hormones, the iodothyronine deiodinases. Iodothyronine deiodinases catalyze the release of iodine from T4 to T3, allowing for increased production of the more metabolically active thyroid hormone T3 (Figure 1). Low plasma selenium concentrations have been found to be associated with impaired conversion of T4 to T3.7 The thyroid gland is a highly metabolically active tissue in which oxidative processes are indispensable for thyroid hormone synthesis. This is namely because that the thyroid naturally produces large amounts of hydrogen peroxide (H2 O2 ). Hydrogen peroxide is a necessary substrate for thyroid peroxidase (TPO), an enzyme expressed mainly in the thyroid, which plays a major role in thyroid hormone synthesis (Figure 1). Under healthy physiological conditions, a balance between the generation and detoxification of free radicals is maintained. A powerful antioxidant enzyme system is activated to ensure the thyroid is protected from ongoing free radical production. Glutathione is one of the key antioxidants used to neutralize free radicals in the thyroid. Glutathione, requires selenium to activate the enzyme glutathione peroxidase (GPX). Selenium-containing GPX in the thyroid cell plays a pivotal role in maintaining normal thyroid functioning by protecting the gland from oxidative stress by removing excess H2 O2 from the tissues. Subsequently, supplementation with selenium has been shown to modify inflammatory and immune responses in patients with immune challenges and decrease TPO antibodies.

The breast and ovaries also concentrate high amounts of iodine. Iodine plays a vital role in supporting the structure and function of the mammary glands. In animal studies, iodine deficiency has been connected to an alteration in the structure and function of mammary glands. In a randomized, doubleblind, placebo-controlled trial, 111 subjects were recruited to examine the effects of iodine administration on breast health in women with normal thyroid function. Following three months of treatment, a statistically significant improvement in breast comfort was observed in the groups receiving 3 or 6 mg of iodine per day compared to placebo.

1 capsule per day or as recommended by your health care professional.

If you are pregnant or nursing, consult your physician before taking this product 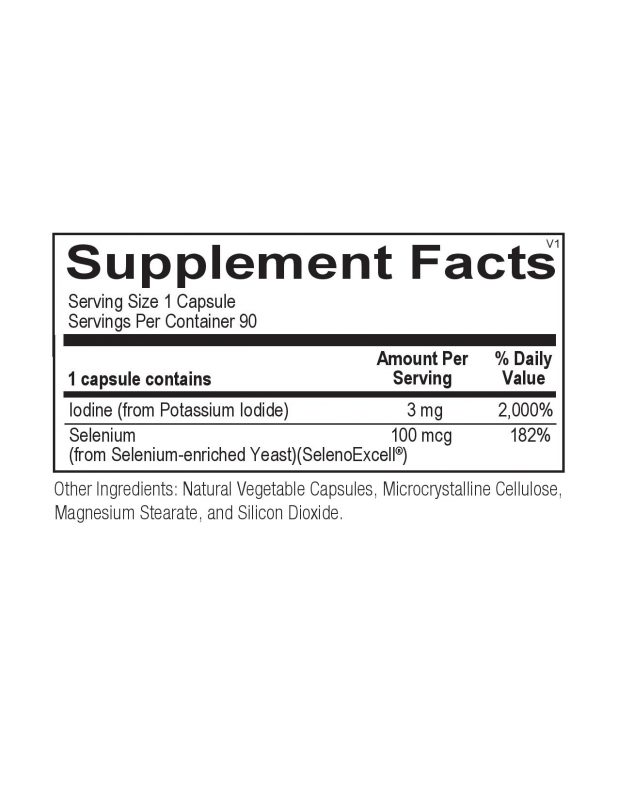