Resvoxitrol is a unique combination of phytonutrients designed to enhance antioxidant potential by stimulating nuclear factor-erythroid-2-related factor 2 (Nrf2), a dynamic pathway known to increase the production of the body’s most important cellular antioxidants. This unique combination of truebroc™, turmeric, andrographis, and resveratrol provides potent free radical scavenging potential, maintaining normal inflammatory balance, and induction of intracellular antioxidant production. These powerful phytochemicals are the basis of many “superfoods” and have extensive, peerreviewed research supporting their dramatic effect on cell health and longevity.

Nrf2 is a transcription factor that regulates the antioxidant response of the body. It is the primary cellular defense against the cytotoxic effects of oxidative stress. This key protein is found inside a cell and is inactive until it is released by an Nrf2 activator. Once activated, Nrf2 migrates into the nucleus and binds to DNA at the location of the master antioxidant regulator, the antioxidant response element (ARE). Studies suggest Nrf2 plays an important role in supporting the activation of cellular antioxidant systems, as well as maintaining normal inflammatory balance. A number of fruit and vegetable compounds have been shown to activate Nrf2 and ARE, and increase antioxidant potential. It is believed that these compounds have a protective effect on the body, help maintain normal inflammatory balance, and induce cellular longevity.

Broccoli seed extract has the highest levels of glucoraphanin (a potent Nrf2 stimulator) of any broccoli product available. In fact, 230 mg of broccoli seed extract is equivalent to consuming 1 ¼ cups of fresh broccoli. Glucoraphanin is a phytochemical compound that acts as the precursor to sulforaphane, one of the leading compounds in broccoli that is responsible for many of its positive benefits. These compounds and their mechanisms have been studied extensively and supportedby more than 500 scientific publications. Glucoraphanin and sulforaphane act as direct activators of Nrf2 and potent antioxidants shown to support detoxification and maintain normal inflammatory balance. Studies show they work by improving hormone balance and increasing functional enzymes that support excretion of toxins from the body. Broccoli seed extract has been shown to remain active within the body for up to three days following consumption.

Turmeric is a bright orange-colored spice used for thousands of years in cooking and medicine. Through its antioxidant mechanisms, the active ingredient in turmeric, curcumin, helps to maintain a healthy cardiovascular system, support gastrointestinal (GI) health, and provide neuroprotective activity. Curcumin has been shown to play a crucial role in maintaining normal inflammatory balance in a variety of bodily systems due to its ability to modulate Nrf2. Studies have shown curcumin maintains normal inflammatory balance in endothelial cells and cardiac cells. Curcumin has also been found to provide antioxidant protection to the cardiovascular system by reducing oxidative stress and supporting a normal immune response.

Andrographis (Andrographis paniculata) is an herbaceous plant native in India and Sri Lanka. It has widely been used in Southeastern Asian medicine for its broad range of healthpromoting properties. In recent years, andrographis has emerged as a potent activator of Nrf2. Recent studies have shown that when compared to other phenolic compounds, 60 mg of andrographis induced the highest activation of Nrf2. This activation helps reduce oxidative stress, quench free radicals, maintain endothelial health and support mitochondrial function.

Resveratrol, is a stilbene found in many plants and red wines. It is the most well-researched stilbene. Studies of resveratrol have found it to enhance the potential of antioxidant and detoxification activity through Nrf2 activation. Other studies have linked resveratrol to enhancing blood sugar balance, maintaining normal inflammatory balance and reducing oxidative stress.

2 capsules per day or as recommended by your health care professional. 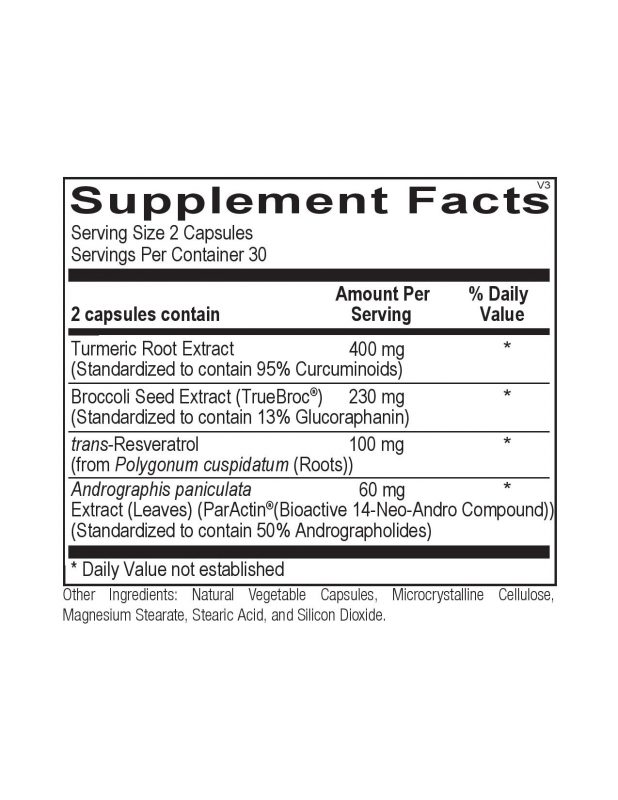