PhytoCore can be used as a stand-alone product or as part of the Core Restore Kit. The specialized blend of nutrients in PhytoCore has been shown to support Phase I and II liver detoxification and boost liver health.

The human body is exposed to a wide variety of toxins on a daily basis. The liver is the body’s main detoxification organ, and provides enzyme systems that safely process and remove toxins. These detoxification systems are very complex and require a variety of nutrients for optimal function. There are two main pathways of detoxification in the liver, known as Phase I and Phase II. Phase I, composed mainly of cytochrome P450 enzymes, involves non-reactive compounds undergo specific reactions which use oxygen to form a reactive site on the compound. This prepares the metabolite for the next step of detoxification, known as Phase II. Phase II is a crucial step— if molecules from Phase I are not fully metabolized by Phase II conjugation, they may cause free radical damage to proteins, RNA and DNA within the cell. Phase II reactions result in the biotransformation of fat-soluble compounds into water-soluble compounds that can then be excreted in the urine, bile or stool. PhytoCore’s botanicals and plant extracts contain phytonutrients, antioxidants and other compounds that naturally protect plants from environmental challenges including exposure to radiation, toxins and infectious agents. In humans, these biologically active compounds have been shown to increase cellular defenses, up-regulate liver detoxification pathways and protect DNA.

Milk thistle (Silybum marianum) is an annual plant indigenous to Europe and the United States and has been used for centuries as a botanical medicine to boost liver health. S. marianum contains silymarin, the biologically active component found in the seeds and leaves of this plant. Silymarin boosts liver health via several mechanisms of action including inhibiting lipid peroxidation, supporting liver detoxification through enhancement of the liver’s glucuronidation pathways, and protection against glutathione depletion. Silymarin has been shown to increase hepatocyte protein synthesis resulting in enhanced detoxification function.

Artichoke is one of the oldest cultivated plants. The ancient Greeks and Romans considered artichoke to be a valuable digestive aid. In traditional European medicine, the leaves of the artichoke were used as a diuretic to stimulate the kidneys and as a choleretic to stimulate the flow of bile from the liver and gallbladder. Artichoke leaf extracts have been shown to provide antioxidant and liver support. In a double-blind crossover study in 20 subjects, artichoke extract was shown to increase the body’s production of bile. Animal studies have shown that artichoke protected liver cells against oxidative stress and prevented loss of glutathione.

Curcumin, the active compound in turmeric, an orange-colored spice used for thousands of years in cooking and medicine, has been shown to support Phase I and II liver detoxification. Curcumin elevates cellular levels of glutathione, one of the body’s major antioxidants that protects cells against free radical damage. Curcumin has been shown to increase glutathione S-transferase (a Phase II detoxification enzyme), as well as the enzymes superoxide dismutase (SOD), catalase, and glutathione peroxidase which results in a significant increase in a variety of antioxidant defenses. In a study examining the effects of curcumin on cells loaded with arsenic, curcumin effectively counteracted the effects of arsenic by increasing the activity of the primary detoxification enzymes SOD, catalase and glutathione peroxidase.

Garlic is a well-known spice with a number of health-promoting properties. Garlic plays a role. In an animal study, the effects of garlic on hepatic cells were examined following exposure to the toxic heavy metal, arsenic. Arsenic administration resulted in generation of free radicals, specifically reactive oxygen species (ROS), which caused cell damage. The ROS generation in hepatic tissue reverted to normal values following the administration of garlic extract indicating the strong liverprotecting effect of garlic.

Dandelion (Taraxacum officinale) is a native plant to the United States and Europe, where the leaves and roots have been used as food and herbal medicine. The German Commission E and European Scientific Cooperative for Phytotherapy have approved the use of dandelion root to support liver health and increase the body’s production of bile. Studies conducted in animals, have shown that dandelion root increases bile secretion as well as glutathione peroxidase, glutathione reductase and SOD.

Studies have shown that the nutrients methionine and choline play a significant role in boosting liver health. Methionine and choline act as lipotropic agents which aid in fat metabolism as well as mobilization of fat out of the liver. In a study examining the effects of choline in 60 men it was found that consumption of 550 mg of choline per day supported the health and function of the liver, as assessed by measuring serum alanine aminotransferase concentrations.

Beet leaf (Beta vulgaris) has been used traditionally to boost liver health. Research has shown that beets are an excellent source of the nutrient betaine. Betaine acts as a methyl donor and supports the methylation detoxification pathway. Betaine assists in the conversion of homocysteine to methionine as well as increasing s-adenosylmethione (SAMe) levels. This prevents fat infiltration in the liver and protects against the free radical stress.

2-3 capsules two times per day or as recommended by your health care professional. 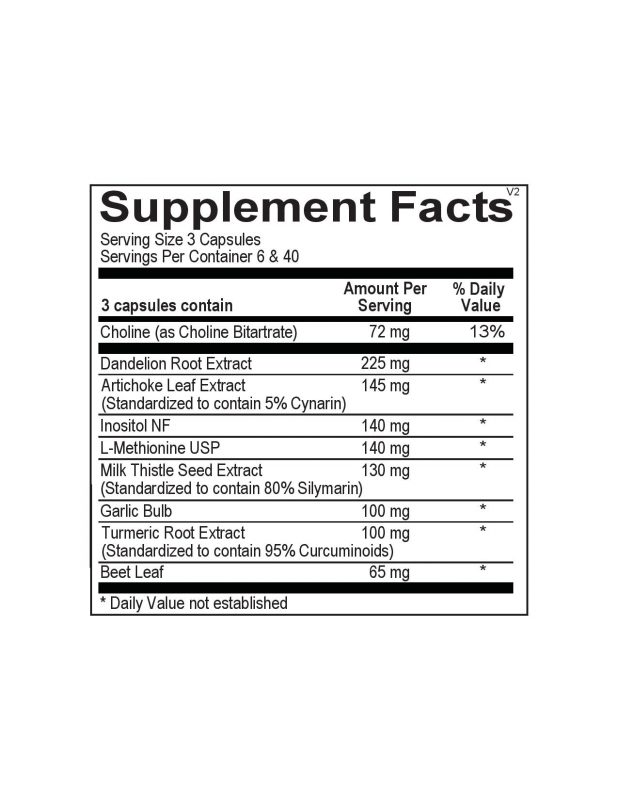