Looking for a spore based probiotic to help your IBS and SIBO? Ortho Spore IG is a spore/soil based, broad-spectrum probiotic formula designed to promote a healthy gut microflora, protect mucosal integrity, and relieve small intestinal bacterial overgrowth (SIBO).

Looking for a spore forming probiotic or soil based probiotic to help your IBS and SIBO? Ortho Spore IG is a spore based, soil based broad-spectrum probiotic formula designed to promote a healthy gut microflora, protect mucosal integrity, and relieve small intestinal bacterial overgrowth (SIBO).

Each capsule of Ortho Spore IG provides key spore/soil based probiotics. Bacillus spore- forming probiotic strains that remain in a dormant protective state in the harsh gastrointestinal environment yet become active on target to colonize and recondition the gut. Uniquely included in this formula are serum-derived bovine immunoglobulins that bind to microbes and toxins that are common in SIBO, for elimination.

According to the literature there are several advantages of Spore forming, Soil based probiotics like Ortho spore IG.

The health of the small intestines relies on balanced microbiota, and probiotics and immunoglobulins can contribute to that balance by having a positive influence on the intestinal environment, including pH, organism diversity, and immune signaling. SIBO remains an area of research, but it is understood that dysbiosis and motility are key components. Such dysbiosis of the small intestine can be attributable to low stomach acid, medications, or alcohol consumption.

Probiotics including spore based probiotics have been studied and are characterized as having broad GI and immune benefits, including

Probiotics are live organisms and must be shelf stable through the expiration date, so they can be precisely delivered to the intestinal tract to have maximum benefit.

Spore forming probiotics are a great addition in the treatment of SIBO. In its dormant spore form, Bacillus surrounds itself with an endospore, which is a tough, natural outer shell that protects it from light, heat, pressure, acid, lack of oxygen, and other environmental factors. Bacillus changes into its active form in the large intestine to colonize the gut to encourage microbial diversity of commensal gut bacteria.

The discovery that the gut barrier plays a key role in immune health fueled the search to strengthen it. Research has shown that the binding capabilities of immunoglobulins have a positive effect on gut barrier function.4

In the search for innovative ways to improve microbiome diversity, we have combined our blend of spore-forming probiotics alongside immunoglobulins uniquely shown to bind to bacteria and toxins, driving immune response.

IgG helps to maintain a healthy intestinal immune system by binding a broad range of microbes and toxins within the gut lumen. As these unwanted triggers are removed, it resets healthy immune tolerance and builds a stronger barrier to the external environment in the gut.

Serum-derived bovine immunoglobulins have the highest IgG concentration available for GI and immune challenges where allergens are a significant concern.

Bacillus coagulans is a spore based probiotic that has been shown to increase the commensal GI microbiota. Supplementation of 1 billion CFU daily for 28 days with B. coagulans significantly increased levels of the commensal microbe F. prausnitzii from baseline compared to placebo, as well as increased Bacillus spp. in fecal samples of adults over 65.5 Bacillus coagulans has also been shown to relieve GI discomfort and improve stool consistency.

B. clausii is another spore based/ soil based probiotic commonly used to promote balance in the microbiome and has showed promising results in individuals with SIBO specifically.8 B. clausii has demonstrated significant effectiveness in adults with acute diarrhea.9 B. clausii has also shown to significantly reduce duration of occasional diarrhea and decreased stool frequency in children.10

Bacillus subtilis is yet another soil baed probiotic that has been shown to relieve GI distress in patients. Bacillus subtilis supplementation of 1-3 billion CFU alongside motility stimulating agents was shown effective for relief of GI symptoms at four weeks .11 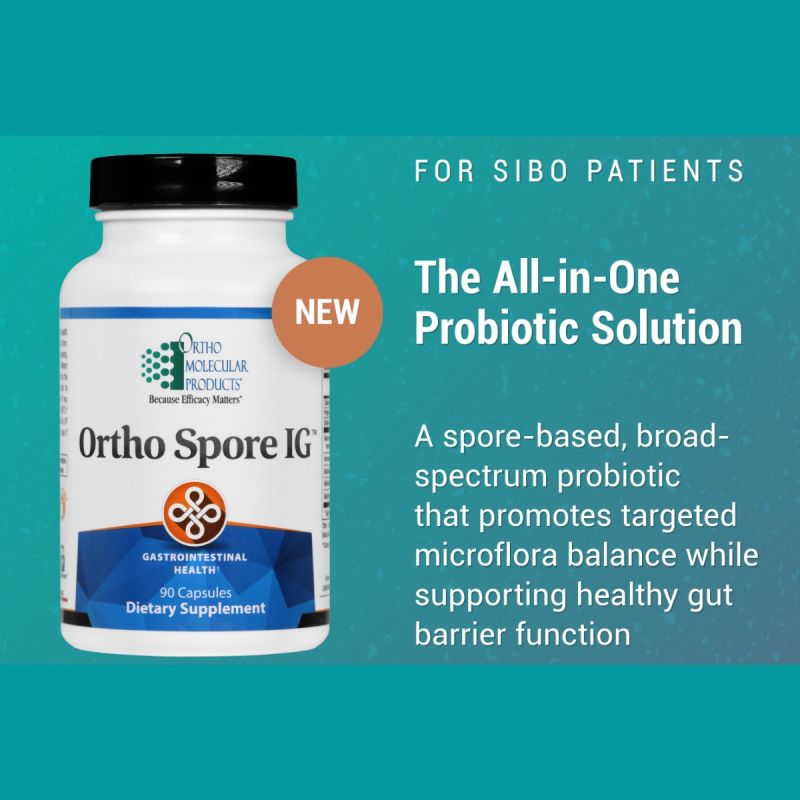 Spore forming Probiotics are a natural choice for supporting beneficial bacteria in the gut, but supplementation to eliminate unwanted microbes should also be considered. Within the gut barrier, researchers found that the binding capabilities of immunoglobulins have a positive effect on gut barrier function in vitro.4

Spore-based probiotics microbial balancers help to reduce or prevent overgrowth of pathogenic bacteria within the small intestines (SIBO), such as Candida albicans.

Unlike lactic acid bacteria that typically not resistant to most antibiotics, spore-based probiotics are much more competitive against other strains, keeping invaders at bay and giving the host greater opportunity to return to homeostasis more quickly.

After doing a complete secretome analysis, Cornell University determined that B. subtilis and B. clausii spores have intrinsic antibiotic-resistant genes and no toxin-producing genes, and can inhibit the cytotoxic effect of C. diff and B. cereus toxins.

A cell culture study showed that B. subtilis “can effectively maintain a favorable balance of microflora in the GI tract” as it produces a protective extracellular matrix…that could potentially protect an entire community of probiotic cells against unfavorable environmental conditions.”

Data from the same study found that B. subtilis cells “possess robust anti-biofilm activity against Staphylococcus aureus through activating the antimicrobial lipopeptide production pathway.” In vitro data showed that B. subtilis to inhibit the growth of Candida albicans and E. coli.

Furthermore, supplementation with this species presented an increase in beneficial Bifidobacteria within the intestinal microbiome, which is shown to result in improved intestinal barrier function, lower inflammation, and lower LPS levels. This may help achieve favorable clinical outcomes for symptoms associated with irritable bowel syndrome and inflammatory bowel diseases that are caused by dysbiosis.

Understanding the effects of probiotics may be complex, but learning how to balance bacteria with spore-based probiotics is essential to maintain gut health.