Polycystic Ovarian Syndrome (PCOS) is a fairly common ailment that affects about 5 to 10 percent of adult women across the United States. The disease entails the formulation of cysts on the outer walls of the ovaries, resulting in ovulation problems. PCOS is a major cause of infertility among women of childbearing age and about one in ten women are affected by it. 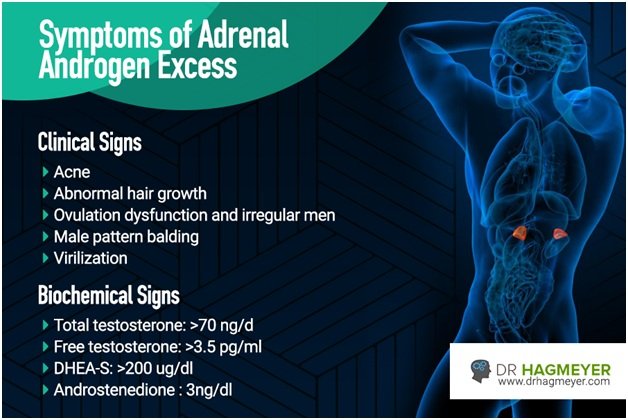 But what makes PCOS worse is that it’s not easy to detect. Even if you visit the gynecologist and they conduct an ultrasound on you, chances are your ovaries might still appear normal. So there’s a high risk of women living with untreated PCOS and not knowing what their symptoms mean. No wonder they call PCOS the silent killer.

Well, for starters, it’s hard to explain the condition without understanding what PCOS is. Hyperandrogenism is a key symptom of PCOS but it’s not the only one. Other possible signs include irregular or missing periods and polycystic ovaries. We’ve established that detecting the latter is complicated but there are ways you can monitor adrenal androgens excess. Plus, there’s more research on hyperandrogenism than there is on PCOS itself!

Now, Iunderstand that all this medical jargon can get a little overwhelming, so ’let’s break it all down for you. Read on to find out what adrenal androgen excess means, how it manifests itself and what you can do about it. If you like, you can also brush up on your PCOS knowledge here.

Androgens are commonly known as male hormones, but there’s a slight deception in the name. Androgens are also present in women and they play an important role in their reproductive health, cognitive functioning, emotional health, muscle growth, and the list goes on to about 200 other functions. Here’s a fun fact; women have a higher concentration of androgens than estrogens present in their body.

Now, both men and women have varying ratios of androgens circulating in their respective systems. Some androgen functions that are common to both the sexes include the regulation of libido, growth of body and pubic hair, and lean muscle function. In both women and men, androgens are responsible for converting androgens into estrogen hormones—but in women, this conversion is the primary purpose of the androgens’ existence.

The androgen to estrogen conversion occurs mainly in the woman’s adrenal glands and sometimes in the ovaries and fat cells.

What Are The Adrenal Glands?

What’s The Function of My Adrenal Glands?

The main task of the adrenal gland is to produce hormones that transfer chemical messages to different tissues and organs. The glands secrete hormones that are specialized to regulate blood pressure, take care of blood sugar levels, help burn fat and proteins, and react to external stressors on the body, such as an injury.

What Type Of Hormones Do My Adrenal Glands Produce?

Let me explain this in terms of the two distinct parts of the adrenal glands.

The outer layer, which is the adrenal medulla, mainly produces catecholamines. These hormones take care of the body’s physiological elements in times of stress and excess stimulation. So this includes hormones like adrenaline (epinephrine), non-adrenaline (norepinephrine) and some amounts of dopamine.

The inner layer, which is the adrenal cortex, secretes three types of hormones.

What Is Adrenal Androgen Excess?
As the name suggests, androgen excess is an endocrinological condition that involves increased levels of androgens in the body, more than they should ideally be. In women, hyperandrogenism includes high levels of testosterone and other male sex hormones in the body. Though the presence of male hormones in the body shouldn’t be a cause of worry, the excess concentrations are usually a sign of PCOS.

I’m placing emphasis on the word ‘usually’ because even when studies show high correlation, it’s best to get a medical diagnosis for PCOS before making any assumptions.

Now, there are two types of hyperandrogenism disorders; one is biochemical and the other is clinical. It doesn’t make too much of a difference which one you get diagnosed with because both show about an 80 to 90 percent correlation with PCOS.

What Is Clinical Hyperandrogenism?
Clinical hyperandrogenism occurs when there are observable signs and symptoms indicating that a woman’s body is producing an excess of androgens. You’ll most likely not feel the need to go through medical tests to determine that you have hyperandrogenism.

What Is Biochemical Hyperandrogenism?
Biochemical hyperandrogenism occurs when you don’t really have physical, observable evidence to show that your body is making extraordinarily high amounts of androgen hormones. You’ll most likely need a blood test to help figure that out.

However, keep in mind that clinical tests can demonstrate type-1 or type-2 errors so you may not be diagnosed appropriately. For example, you could be showing signs of clinical hyperandrogenism but the blood test shows up completely normal. For this purpose, I encourage all readers to remain knowledgeable and vigilant about the causes and symptoms of androgen excess.

What Are The Signs Of Adrenal Androgen Excess?

Here are some clinical symptoms that you should be on the lookout for:

Biochemical signs of adrenal androgen excess tend to be harder to spot but can be useful to rule out doubts about clinical signs. Here’s a list of androgen levels you can get tested for. You can schedule a consultation to help interpret your test results. 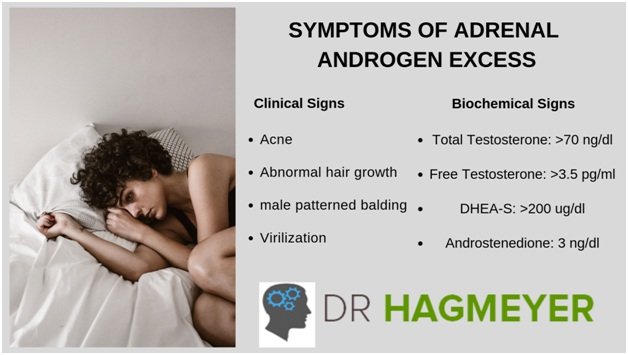 There’s still a bit of mystery surrounding the exact cause(s) of hyperandrogenism. Though, there is widespread consensus that PCOS is a leading risk factor for excess secretion of androgens. About 90 percent of women with PCOS report high levels of androgens like testosterone in their body. Women with PCOS also report slightly higher levels of the hormone DHEA-S. But there are a few studies that indicate DHEA-S levels are familial in nature so your genetic history can play a role here.

Some studies show that women who have undergone premature adrenal activation, i.e. the secretion of sex hormones before puberty are also at risk of hyperandrogenism. This symptom coincides with the appearance of underarm and pubic hair in young women.

Androgen production can also increase with prolonged exposure to stressful situations. Cortisol is produced by the body to tackle stress and the signal for this comes from the ACTH hormone. Women diagnosed with PCOS can experience overstimulation of the adrenal glands in stressful situations, which can lead to high levels of androgen secretion.

As is the case with PCOS, diagnosing androgen excess can be a complicated issue because the two are closely related but not mutually inclusive. So if you’ve been diagnosed with PCOS but your lab tests show that your androgen levels are normal, you might begin to wonder if your diagnosis is wrong.

The problem is that not everyone agrees with how to diagnose PCOS. Many doctors claim that according to the Rotterdam diagnostic criteria, increased levels of androgens in the system are not always a symptom of PCOS.

Is There Any Other Way To Diagnose Adrenal Androgen Excess?

Yes. Hyperandrogenism is associated with numerous health conditions apart from PCOS. In fact, PCOS is only used as a means to eliminate other possible causes of androgen excess. In most cases, doctors look for two conditions to help diagnose hyperandrogenism:

Congenital Adrenal Hyperplasia: CAH is a hereditary disease that causes the abnormal excretion of hormones from the adrenal glands. People with CAH are usually diagnosed at a very young age but it’s possible to develop this condition at a later age. This is referred to as non-classic CAH.

Cushing’s Disease: This occurs when the body produces excessive levels of cortisol for a long period of time. Increased amounts of cortisol can in turn overstimulate the adrenal glands to produce the ACTH hormone.

Fair warning though, both conditions can exhibit symptoms that are eerily similar to those of PCOS, so make sure you seek professional help for this.

Adrenal androgen excess, also known as hyperandrogenism is an endocrinological disorder that is characterized by the increased production of male hormones in a woman’s body. Androgens like testosterone, DHEA-S, and ACTH might significantly increase during this time and can manifest themselves in symptoms like acne, abnormal hair growth, and virilization that are very similar to symptoms of PCOS, CAH, and Cushing’s disease.

Getting a lab test done is going to be just one half of the process. The other half is to make a holistic treatment plan of your individual condition. If you’re feeling a little lost, you can start out by filling this health survey and a member of my team will be in touch with you shortly.

Plus, there’s a variety of clinical tests that you can try from the comfort of your home!

Feel free to get in touch if you need more information on adrenal androgen excess.