It no surprise that autoimmune conditions such as Thyroid, Rheumatoid arthritis, Celiac disease, Multiple Sclerosis, Pernicious anemia, Diabetes, Skin conditions, and many others are on the rise. What you may not know is that a gluten sensitivity and gluten intolerance may be a huge contributing factor. In fact the longer sensitive individuals eat gluten, the more likely they are to develop other autoimmune diseases.

Autoimmune diseases arise from an inappropriate immune response of the body against substances and tissues normally present in the body. In other words, the immune system mistakes some part of the body as a pathogen and attacks its own cells.

This may be restricted to certain organs (e.g. in autoimmune thyroiditis) or involve a particular tissue in different places. The treatment of autoimmune diseases is typically with immunosuppression—medication which decreases the immune response. But this approach ignores a very fundamental concept. The latest research is showing that certain foods, virus, parasites and toxins can be a major causative factor in autoimmune conditions. If this seems far fetched simply perform a simple Google search on Grains and autoimmune disease. 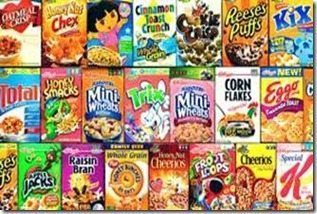 Today’s article, we are going to talk specifically about gluten. In fact take a look at the cereals you see to the left, ALL of them come from grains.

Are you giving these to your children?

Are you consuming any of these?

They then compared the prevalence of these conditions in three different subgroups, which were separated based on when the patient was diagnosed with celiac disease (before age 2, between ages 2 and 10, and after age 10).
The team found that the prevalence of the other conditions was highest in the subgroup of patients diagnosed after age 10. Similarly, patients diagnosed between ages 2 and 10 had a higher rate of other conditions than those diagnosed before age 2.This suggests that the prevalence of autoimmune conditions increases with increasing age at diagnosis of celiac disease (ie, increasing duration of exposure to gluten).
The researchers’ chart below demonstrates the frequency of developing other autoimmune diseases.

The authors concluded: “Indeed, the age at diagnosis of celiac disease is the single best predictor of the prevalence of autoimmune disease.”
The sensitivity and specificity of the testing is paramount in finding gluten sensitivity at a young age. The typical medical test for gluten sensitivity is accurate mainly when there istotal villous atrophy of the small intestine. But what about at 50% villous Atrophy? what about 70%? what about 85%?
Imagine your dentist waiting until your tooth is over 90% rotten. THATS UNACCEPTABLE! and in my humble opinion millions of individuals will continue to dye a slow death because many doctors are still using antiquated laboratory testing.